ON THE WAY TO BEING AN ENERGY HUB: THE WORLD’S BIGGEST STORAGE FACILITY

The Groundbreaking Ceremony of Tuz Gölü Natural Gas Storage Expansion Project, one of the most important projects developed by BOTAŞ in order to ensure energy supply security, was held on 29 July 2019 at the BOTAŞ Salt Lake Operation Directorate with the participation of the Minister of Energy and Natural Resources Mr. Fatih Dönmez.

The ceremony started with the introduction video of the project, followed by the reading of the message of the President Recep Tayyip Erdoğan, after which Mr. Fatih Dönmez, the Minister of Energy and Natural Resources Fatih Dönmez, Mr. Burhan Özcan, the Chairman of BOTAŞ Board of Directors and Mr. Fırat Çeçen, the Vice Chairman of IC Holding Board of Directors each gave speeches.

In his speech made at Aksaray during the Groundbreaking Ceremony of Tuz Gölü Natural Gas Storage Expansion Project, Minister Dönmez stated that, until early 2000s, Turkey experienced severe difficulties in every winter season, and both ordinary citizens and industrialists were constantly full of apprehension as there was no developed natural gas infrastructure. He reminded that in those years, there were never-ending news stories both on television and in newspapers such as “Turkey run out of natural gas, this will be a cold winter” and he said “Now that we are at this point today, we remember those days with bitter experiences. The change and transformation Turkey has been through have been positively reflected in energy sector in general, and in natural gas sector in specific. Thanks to the international pipelines such as TANAP, TurkStream and to the storage, FSRU, LNG investments we have engaged in the recent years, Turkey has taken care of its natural gas supply problem for good.

The Minister of Energy and Natural Resources Mr. Fatih Dönmez said "Our expansion project is the biggest storage project among all the storage projects currently under construction in the world".

We Have to Build Our Safe Harbors

Pointing out that the energy balances in the world can rapidly change, Dönmez also said:

Giant Storage Capacity on the 100th Anniversary of the Republic

Burhan Özcan, General Manager of BOTAŞ, who gave live interviews to several media organizations before the ceremony, said in his speech: “Our Tuz Gölü Natural Gas Storage Facility, which received the largest share of our investments in 2019 and which is the biggest investment of this field in Europe, is comprised of 52 caverns which are formed by leaching of salt wells located 1.5 km below the ground.”

BOTAŞ General Manager Burhan Özcan indicated that, especially with the Northern Marmara storage expansion investments simultaneously being made with Tuz Gölü Natural Gas Storage Expansion Project, a storage capacity of 11 billion cubic meters and a withdrawal capacity of 155 million cubic meters would be realized in the 100th year of the Republic; “With these numbers, we will have a total storage capacity exceeding 20 % of the yearly country-wide natural gas consumption, which is even higher than European Union storage requirements.”

“Currently, while the world is struggling with crises and problems, a total of 1.2 billion US Dollar credit solely for the Stage II, received from World Bank and Asian Infrastructure Investment Bank as a result of the steps we have taken for the purpose of becoming an energy hub is a clear sign that both our country and our project is worth investing. Moreover, with TurkStream, TANAP and FSRU projects, our natural gas storage investments and LNG terminals, we are stepping forward to our target for moving beyond being only a transit country and rather becoming an energy trade hub.

In line with the National Energy and Mining Policy, we continue with all the necessary projects to sustain the security of supply and ensure access to energy for our nation. In order to sustain the security of natural gas supply, we have strengthened our natural gas storage infrastructure with our investments and we continue to strengthen it. As a result of these investments realized with the understanding “Strong Turkey, Strong Economy” in the last two years, i.e. in 2018 and 2019, we no longer have any cities without natural gas. We have taken our natural gas infrastructure to 516 residential areas. These works continue increasingly.”  Mr. Özcan also said that the daily maximum natural gas consumption need of Turkey is met without any problems, and as a result of the investments made, we not only fulfill our own need but we have also opened the door for exporting the extra amount to the neighboring countries.

Turkey is an Indispensable Country for Energy Supply Security of Europe

Emphasizing the fact that Turkey is not a supplier country in natural gas yet it has realized important investments for becoming a permanent link in the supply, transmission and consumption chain, Mr. Özcan said:

“Particularly with storage, FSRU, and international projects such as TANAP and TurkStream, we have come to such a point that we can even contribute to Europe’s natural gas supply security. Just as being a strategic partner for the European Union's energy policy, Turkey has also become an indispensable country for Europe's energy supply security. A significant matter in terms of environment and energy efficiency is the fact that we will meet 60 percent of the electricity demand of our facility with the solar power plant we will commission today. With the further expansion investments we will make later on, we will have the opportunity to meet all the energy need of our facility from solar power plants."

BOTAŞ General Manager Mr. Özcan also mentioned that they pump the fresh water brought from Hirfanlı Dam for the leaching purposes into Tuz Gölü as brine after the operations and as such the water level in Tuz Gölü has increased each passing year and the habitat of Tuz Gölü basin has been revitalized. The most obvious indicator for this he said is the number of flamingoes in the area. Known with their selectivity with regards to breeding grounds and once their population as low as 3000s, flamingoes now reproduce in the area. Their number was around 12 thousand last year, and as of yesterday, it was recorded that their population exceeded 30 thousand. Accordingly, the area is now indispensable for them.

Mr. Özcan concluded his words as follows: “I would like to express my wholehearted thanks to Mr. Fatih Dönmez, the Minister of Energy and Natural Resources who provided full support for realization of this project, the former Minister of Energy and Natural Resources Mr. Berat Albayrak, all other international stakeholders, particularly World Bank and Asia Infrastructure Investment Bank officials and especially my colleagues. I hope that our facility will be beneficial to our country and our nation.”

Following the speech of the Vice Chairman of IC Holding Fırat Çeçen, the Minister of Energy and Natural Resources Fatih Dönmez, the Ambassador of the People's Republic of China, Aksaray Provincial Protocol, BOTAŞ General Manager and other guests pressed the symbolic buttons and the first concrete pouring took place; the ceremony ended as such.

After the ceremony, a briefing regarding the facility was presented to the Minister of Energy and Natural Resources Fatih Dönmez by BOTAŞ officials at the SCADA Center. 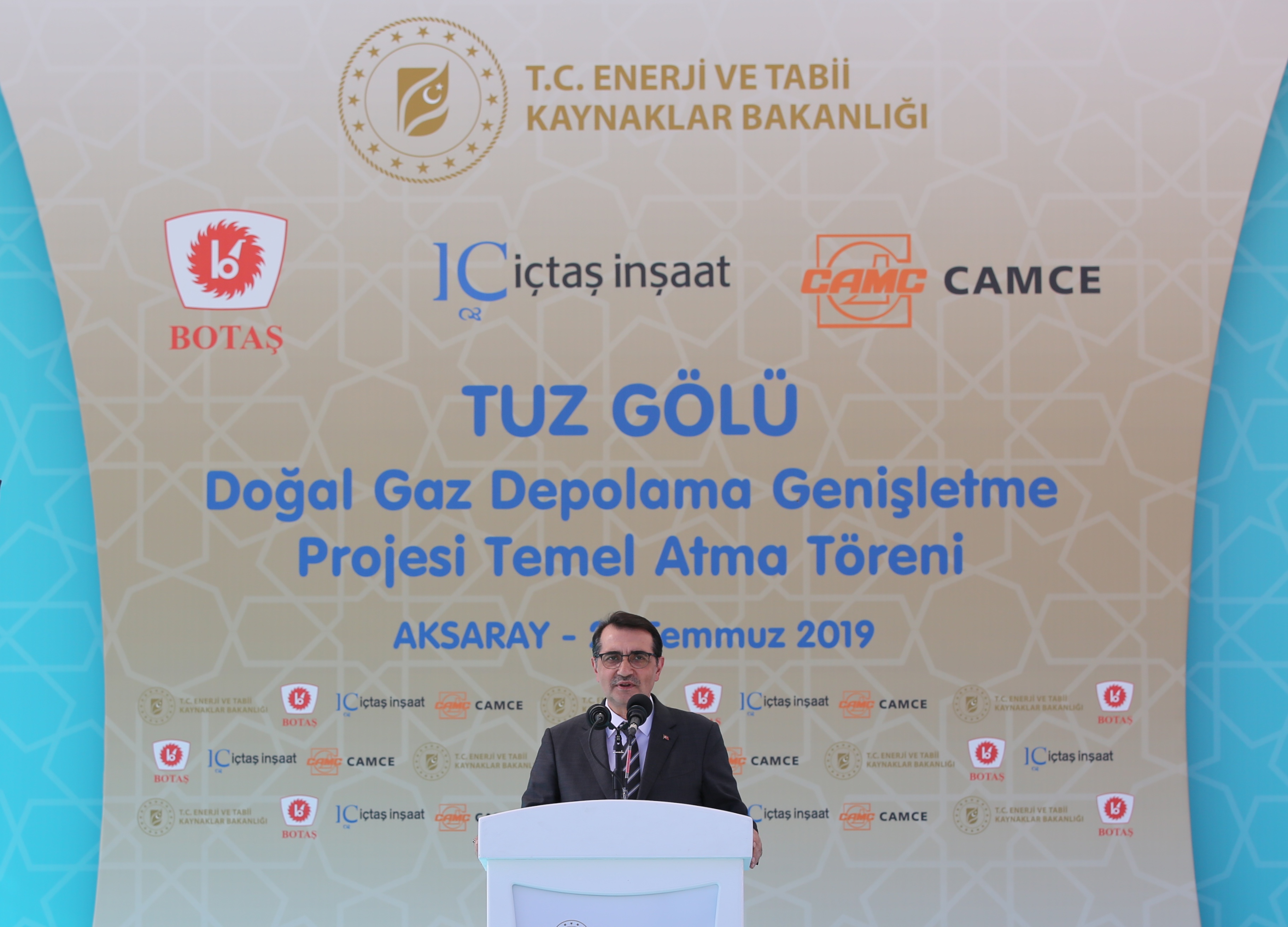 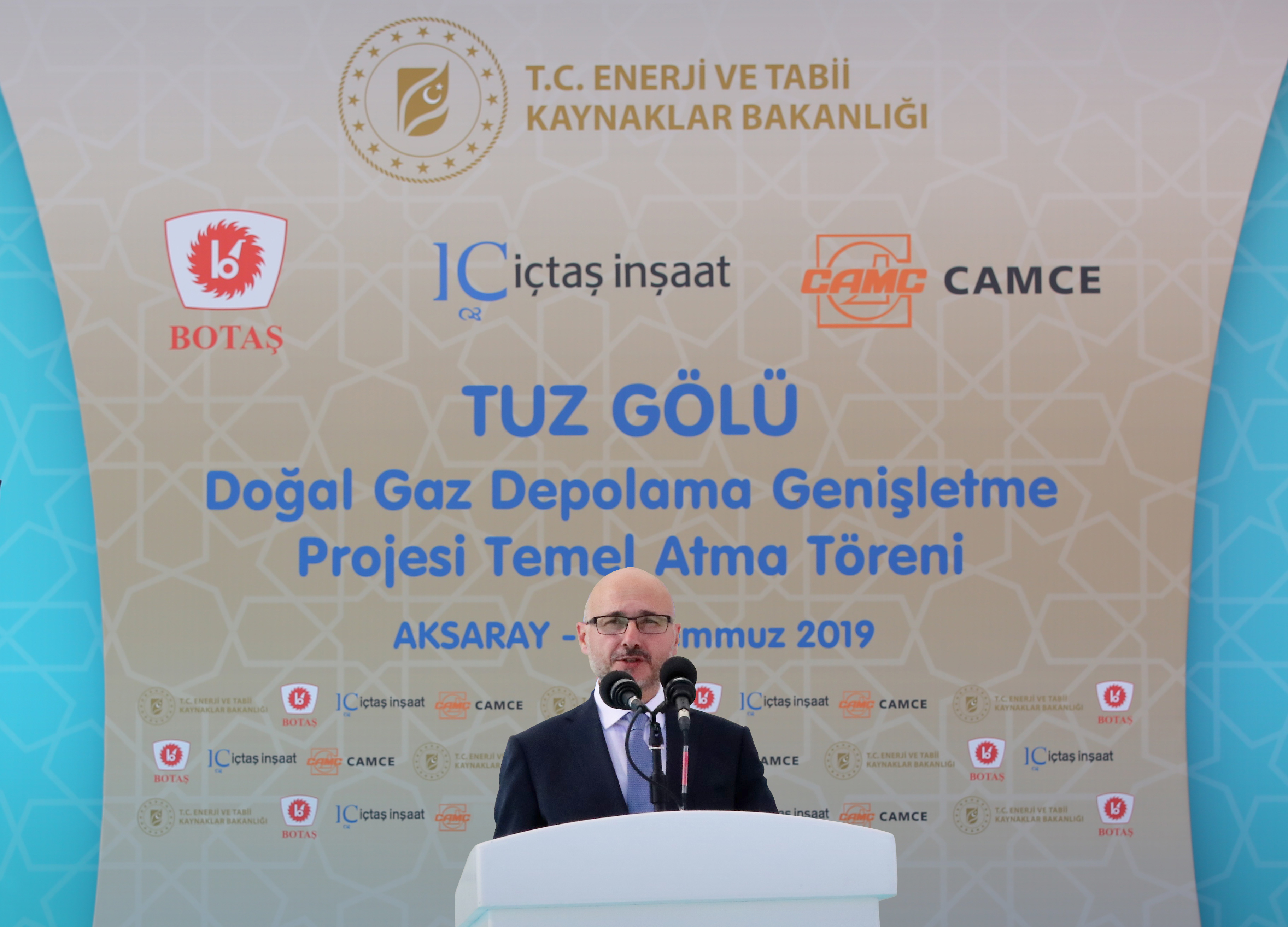 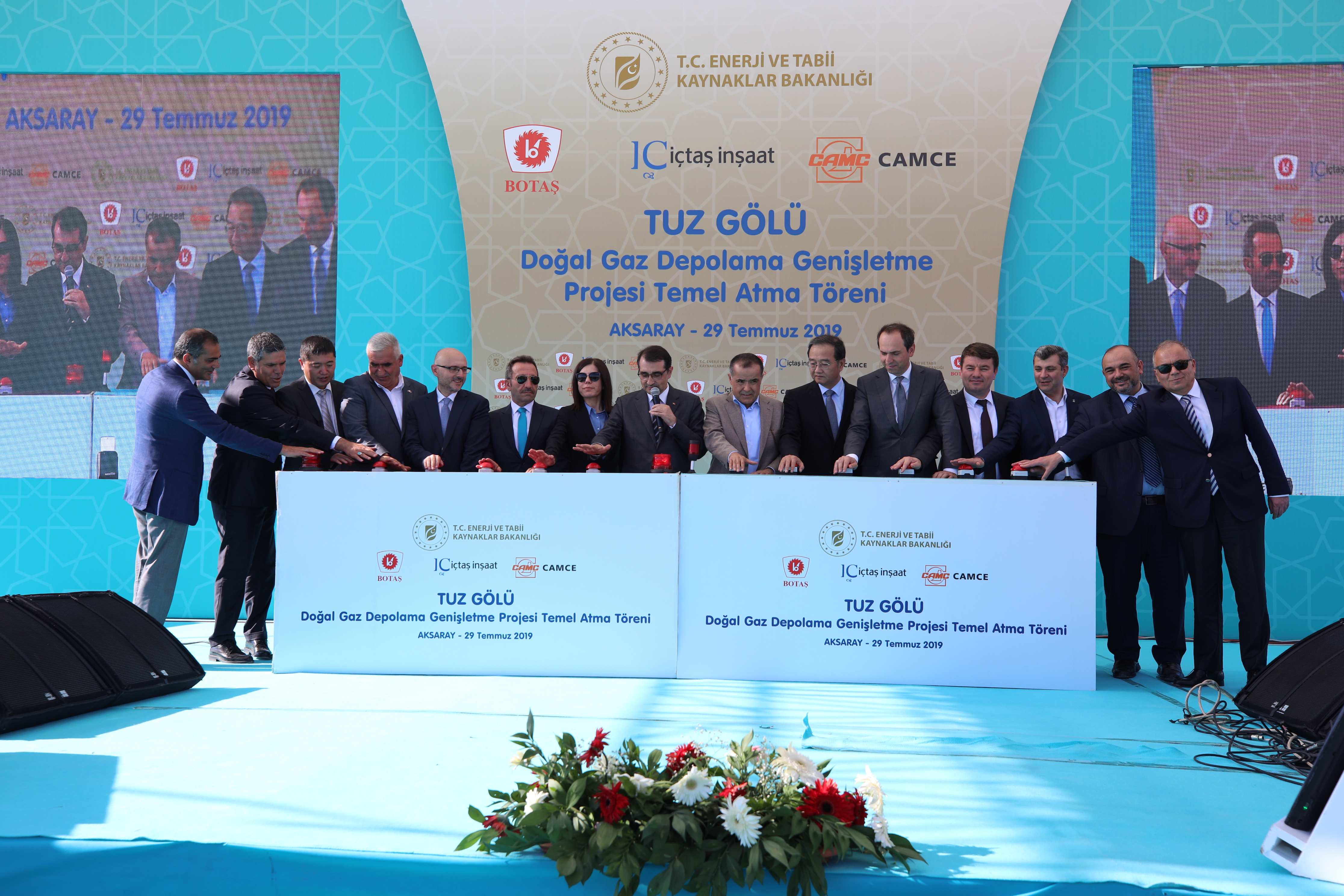 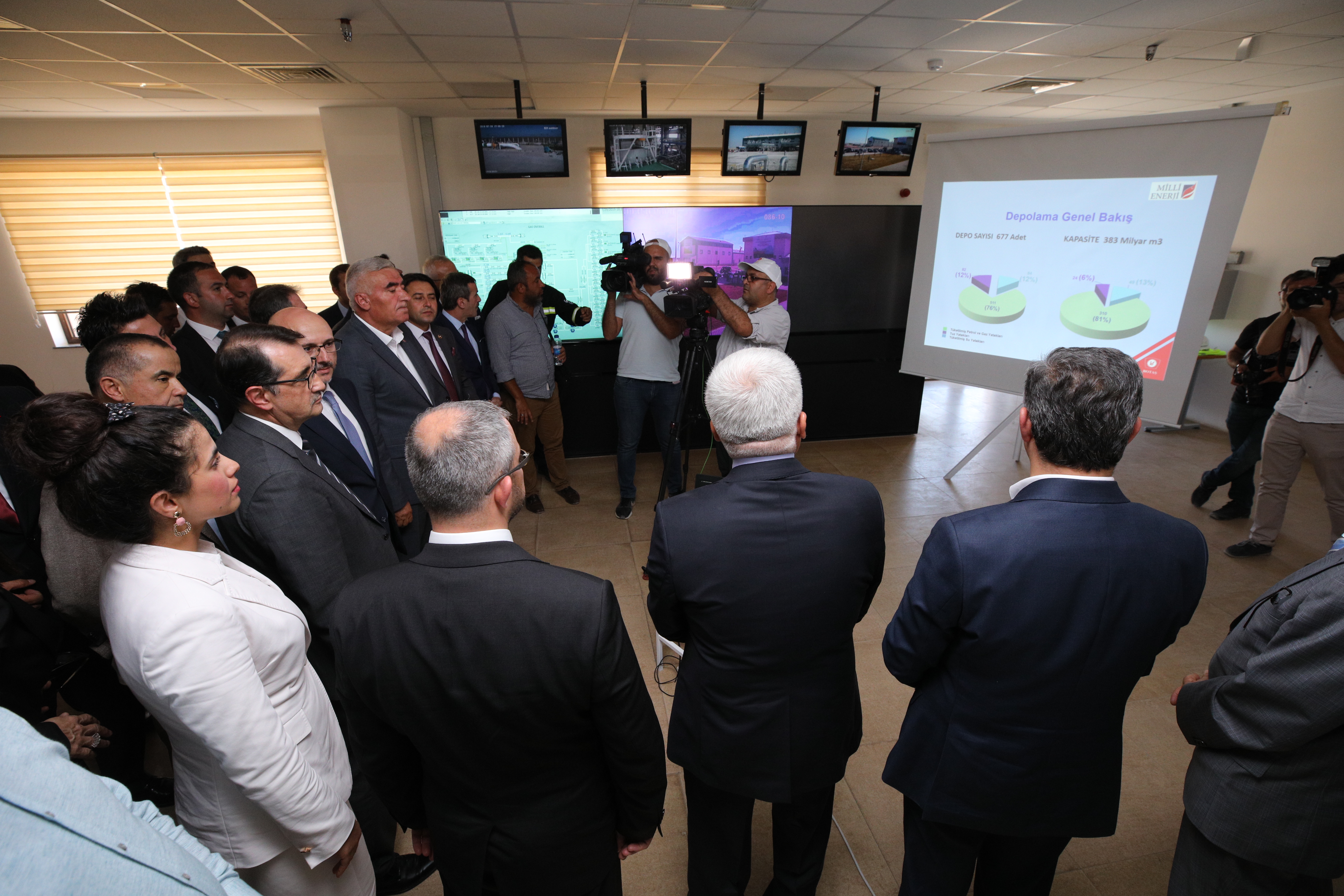 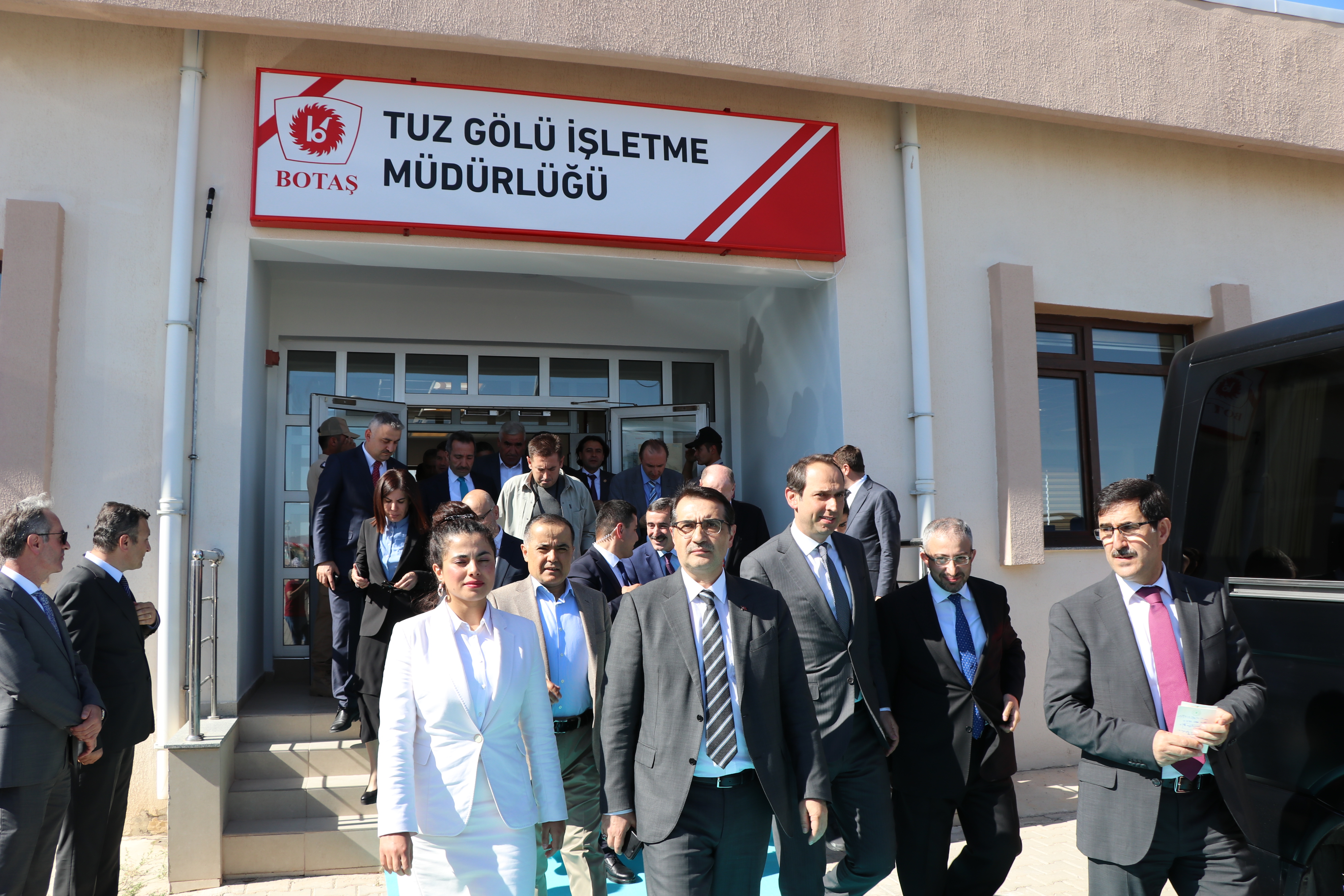 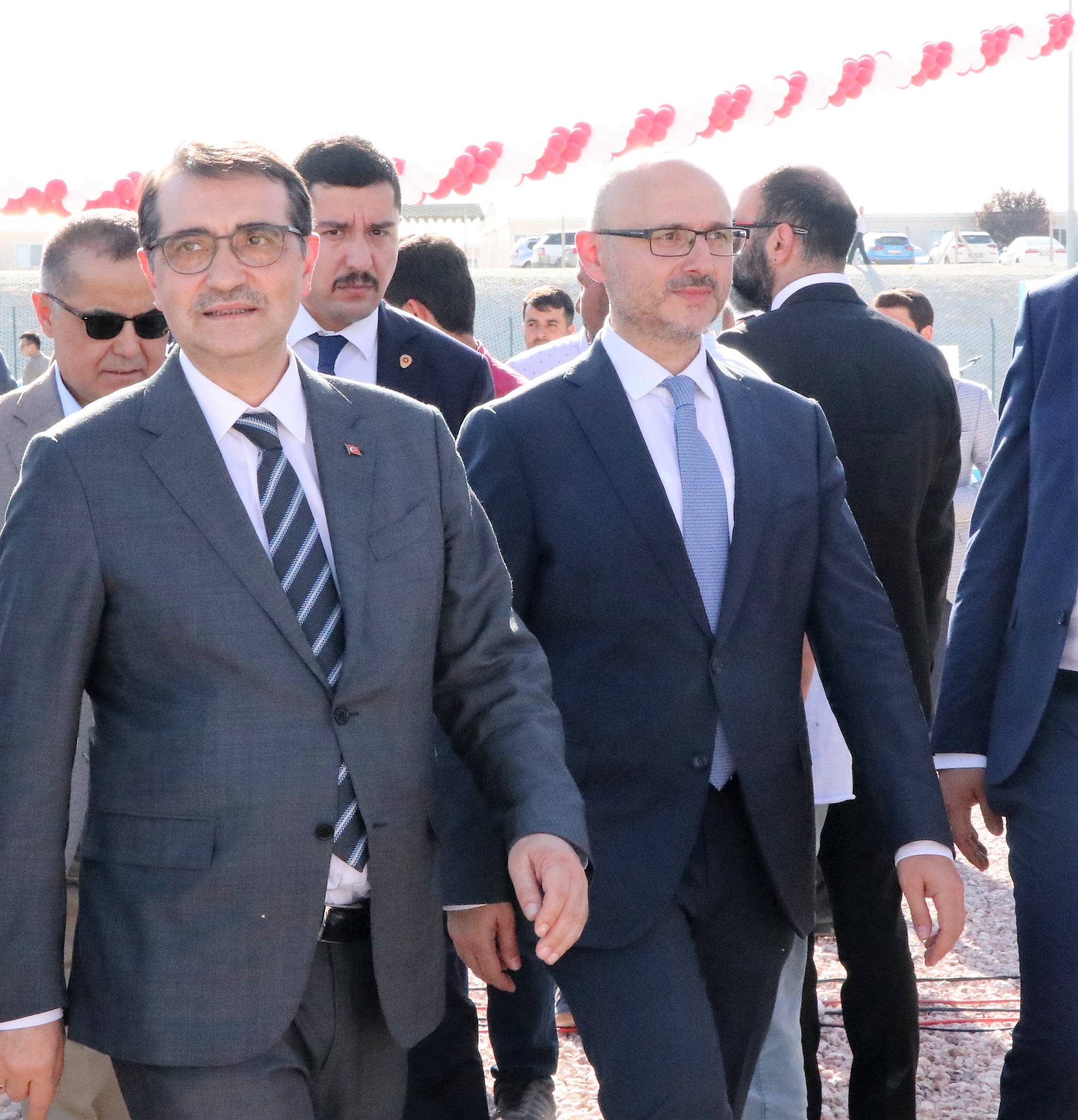